EVP SHIFTER 3 Sound Banks - 2,000 sounds each (6,000 total). Audio is played in randomized "Bursts". 1 Noise Banks - Contains no speech sounds. Made from the inter frequencies across the AM/FM/SW/VHF/UHF bands. 4 Band Equalizer - Adjust the Low, Mid, Upper, and High ranges of frequencies. Mic Feedback Delay - Automatically turns on the Microphone when audio is played. This creates a Feedback Loop by feeding the audio's output back into itself. YOU MUST RECORD! - The app is designed for Enhanced EVP Communication. Recording your session and then reviewing the audio is critical for receiving messages. The app should sound incoherent, the audio coming through should just be gibberish unless something or someone is using it to communicate. Listening and deciphering messages takes practice, you learn to develop an ear for it over time. If you don't know how to record, look up how to use the built in record feature in IOS. ESTABLISH A CONNECTION - This app may not work for everyone. Establishing a connection to the other side is very important for receiving messages from beyond. An open mind and a focused approach will yield better results. If there's no connection then no messages will come through. Meditation helps. HOW IT WORKS - When you turn on the app it activates the 3 sound banks that automatically adjust their Scan Rate at random and independent of each other. The audio is played in randomized bursts rather than a continuous play. The pitch of the sound is constantly changing. We used a Pitch Shifter effect to periodically create stutters or disturbances in the sound. The Resolution, Frequency, Time, and Amplitude is constantly being shifted. Echo, Phaser, and Chorus audio effects are randomly turned on and off with their intensities randomized as well. We use a combination of the Chorus, Phaser, and Flanger audio effects to implement what is known as Comb Filtering; applying a delayed version of a signal to itself. This creates a variation of a Feed-Back Loop that is known to be an important element for spirit communication. The app also has a "Mic Feedback" feature that turns on the microphone whenever the audio is being played (in a burst). It then turns the mic off when the audio stops playing. This creates a feedback loop by feeding the audio output back into itself. It's important to note that very little communication is heard in "Real time" during the sessions. Though it is possible for this type of communication to take it is not what this app was designed to do. The main focus of this app was to facilitate Enhanced EVP Communication, so recording your sessions and reviewing the audio is essential for using this app. This app is made for audio experimentation by ITC/EVP researchers and is often used by ghost hunters/ paranormal investigators. Results may vary. Note: the IOS version of this app is unable to support mic input and external speaker output at the same time. When mic feedback is turned on, audio will come out of the device’s speakers regardless of connected external speakers. To use with external speakers, please keep mic feedback off. 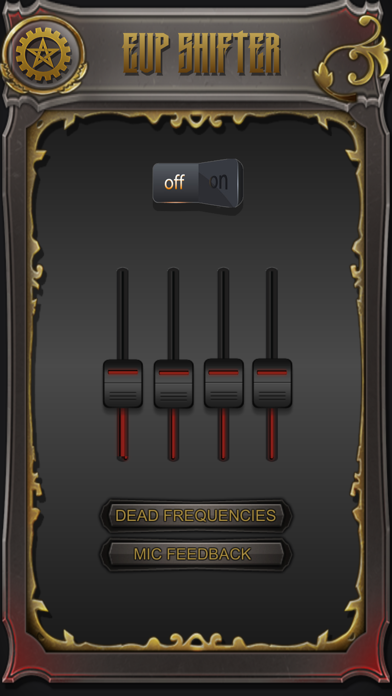